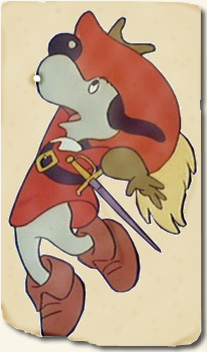 Our hero Dogtanian is a brave and fearless country pup who wants to be a musketeer. On his journey he falls in love with Juliette and becomes friends with Pip, Aramis, Athos and Porthos. Dogtanian is the best swordsman in France (beating Count Rochefort, Widimer, The Blue Falcon and loads of the Cardinal's guards), he's also prone to thinking with his sword and has excellent dress sense.

D'Artagnan was Charles de Batz-Castelmore, born in Lupiac not Béarn. He became a musketeer in 1645 (3 years after Richelieu's death), and when the musketeers disbanded became Cardinal Mazarin's (Richelieu's successor) personal bodyguard. He also became (the unpopular) governor of Lille before returning to battle in the Franco-Dutch war, dying in the siege of Maastricht. 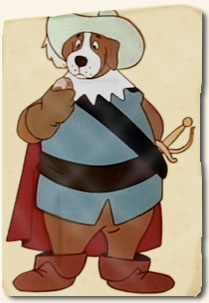 Athos is probably the strongest man in France, strong enough he doesn't always have to use his sword and a bit of an alcoholic.

In the novels Athos is Porthos (no-one knows why they were swapped). Based on Isaac de Portau who joined the musketeers 2 years before D'Artagnan. 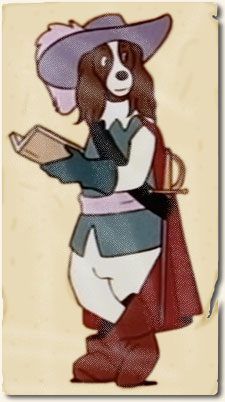 One of the Three Musketeers Aramis is one of the best swordsmen in France. He's a bit of a ladies man. But also very religious, in The Three Invincible Musketeers Dogtanian sees him reading his Bible.

In Dumas' novels he becomes a Jesuit Abbot, Bishop of Vannes and Duke of Alameda. The real life Aramis was Henri d'Aramitz, Treville's half-brother, but he had an uneventful life after the musketeers 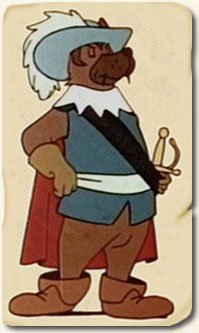 Porthos is the leader of the Three Musketeers, the best swordsman in the Corps and not a thief. He's the bravest and noblest of the Musketeers, but has a dodgy past.

In the novels he's Athos – revealed to be Milady's ex-husband, he also tries to drown his past in drink. In real life he was Arnaud de Sillègue d'Athos, like Aramis related to Treville, he died before D'Artagnan joined the musketeers. 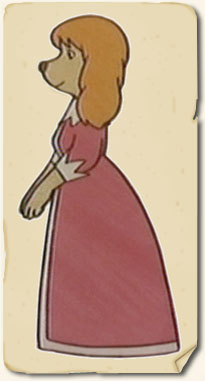 Juliette is Dogtanian's beautiful girlfriend and a lady-in-waiting/confidant of Queen Anne. When Dogtanian arrives in Paris she soaks him, twice, before letting him stay in her uncle's house. She is prone to getting kidnapped, running off and looking embarrassed.

Juliette is based on Constance Bonancieux (who's already married) from the Dumas novels. 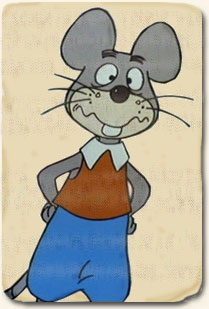 Pip is Dogtanian's sidekick for the second half of the series. Pip spends most of his time giving Dogtanian advice (mostly to think with his head rather than his sword) and complaining about a lack of food. He did help Dogtanian win the Musketeer trials. I think* Pip was added for a bit of slapstick, and to get in a pun as his surname's Squeak (full name Pippin Aloysius Squeak III).

*I haven't read the novel so there might be a Pip character in there. 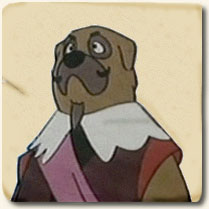 Monsieur de Treville is the leader of the Musketeer Corps, he fought bravely for France with Dogtanian's father but now only fights political battles with Cardinal Richelieu. He's a firm believer in the Musketeer's motto 'One for all and all for one', willing to bring every Musketeer out 'on manoeuvres' to defend 4 and ignore fighting if it was to defend the honour of the Musketeers. 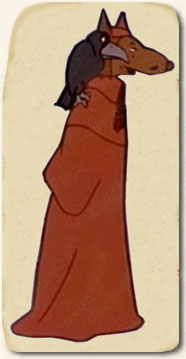 Cardinal Richelieu is the Prime Minister of France and plans to have absolute power by controlling King Louis. The thing standing in his way is Treville and the Musketeers, he spend the series trying to get the King to let his guards guard the palace which would give him total control. He has his pet raven with him all the times, probably because it annoys Widimer.

In real life Richelieu (Armand-Jean du Plessis) was not the villain of Dumas' novels, he aimed to increase the power of the monarchy and the Catholic church (so he was a villain, not the villain). He destroyed the political power of the Huguenots, French Protestants and Urbain Grandier. Most of Richelieu's harshness was probably down to Louis XIII's weak leadership, overall his leadership changed France so it could become a world power under Louis XIV. 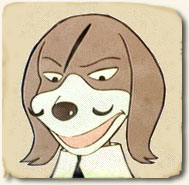 Count Rochefort, aka The Black Moustache, is the first person Dogtanian meets on his journey. Their second meeting end with Dogtanian beaten and bruised and it isn't the last time they fight. Rochefort is Richelieu's spy, helping with the Cardinal's plans to remove the Musketeers. He's a cavalier, excellent with the sword and with a sense of honour he ends up retiring his sword and recommending Dogtanian for a place in the Musketeers.

In the novel Rochefort is noted for a scar on his cheek and fights with D'Artagnan on 3 occasions before becoming friends, although D'Artagnan accidentally kills his friend in a riot. He was probably based on Henri-Louis d'Aloigny, the Marquis de Rochefort 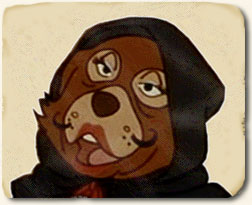 Widimer is the Captain of the Cardinal's Guard, he's an incompetent, cross-dressing, boob. He fails in every attempt to to stop Dogtanian and the Musketeers, ending the series considering suicide before deciding to leave Richelieu's service. Unlike Rochefort he has no honour, using a gun or poison in his attempts to kill Dogtanian.

Milady, aka The Countess de Winter, is Cardinal Richelieu's spy. She's driven by money and nothing else (except revenge). She's beautiful, even to other species, and was married to Porthos (Athos in the novels).